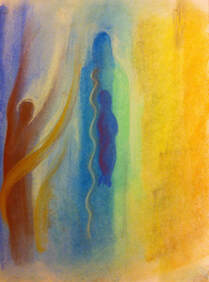 What does the name Auriel mean?
The name Auriel is a Hebrew, meaning Lion of God. The quality of this name is a deep inner desire to serve humanity and to give to others by sharing money, knowledge and experience, or creative and artistic ability. This name bestows to the bearer the capacity for creative expression, drawing them to the arts, and joy of life. The name strives towards being at the centre of life and is drawn towards the limelight.
Auriel is also used as a variation of the names Oriel, or Uriel, archangel of Earth, meaning light of God in Hebrew. Auriel is invoked as the guardian and representative of the Earth

Here are excerpt from the Article entitled: Uriel, the Most Unknown Archangel , by Truus Geraets Costa Mesa, California October24, 2011
“…With Uriel we will learn to see not only into the past, but far into the future. 'We will open ourselves not only to the narrow earthly horizon, but to the great horizon from Saturn to Vulcan” (*1). Amazingly enough, Emerson wrote a whole poem on Uriel. He let us know that Uriel had such an extended wisdom that even the angelic hosts shuddered, when they heard him utter the words: “Evil will bless and ice will burn'.
From Rudolf Steiner’s lectures we know that Uriel’s intelligence governs all planetary and zodiacal activity in the cosmos and that in Uriel’s thinking world thinking is embedded. His gaze is stern, making us aware of our faults and misdeeds, of our karmic debt to man and the earth. That’s why Uriel wants us to develop a ‘historic conscience’.
A book like “Blessed Unrest” by Paul Hawken gives us a glimpse in the direction of this kind of historic conscience. While Michael wants us to develop a consciousness of man in relation to the supersensible, Uriel wants us to wake up towards an inner conscience.
Uriel has also been called the Angel of Wrath. We already may feel that apocalyptic times are upon us. Karyn Martin Kuri (*2) warns us that those, who are not aligned to the Divine, may experience Uriel as painful. While aligning to Uriel and his world thinking we may find the courage to meet the future with deeper insight and greater social will.
Dieter Brüll talks about the Urielic gesture, an attitude which takes the needs of the other as one’s own starting point. This social attitude is not in the ideas about it. It only lives in the social deeds. Humanity will not find its true destiny if even one soul is missing, when human dignity is not guaranteed for every fellow soul...
...Many other Michaelic groups, who might not have heard about Anthropsophy, have yet taken up the Urielic impulse: organizations like Greepeace, Amnesty International, Doctors without Borders, or people like Muhammed Grameen or Kübler- Ross to only name a few...
​Here is an excerpt from Wilfried Hammacher’s play for Speech and Eurythmy, called Uriel, a St. John’s Hymn, translated it into English by . the author of this article:
Uriel, ruling guardian of summer heights,
You with the all-penetrating gaze.
​From your eyes stream forth
The light of the resting stars,
Of the wandering moon,
Of fire flaming powers of lightning.
You watch and judge the reapers of the harvest,
Of us, man on earth, usurpers of the light.
You, Archangel Uriel, conscience of the world,
Wisest among all angels. "
Let it be our task to bring into visibility on a global scale what so many people, coming from an anthroposophical impulse, have established in numerous social projects all over the world. Let us feel a united front with each other and with the many who, without knowing about Anthroposophy, are also working towards the same goals, of placing the human being (anthropos) center stage again. In the words of another Urielite, Paul Hawken (*3): In the chaos engulfing the world, a hopeful future resides while the past is disintegrating before us…”
Notes:
*1 - Rudolf Steiner, Die Verinnerlichung der Jahresfeste, translated as St. John’s Tide, 1966
*2 - Karyn Martin Kuri, A Message for the Millennium, Ballentine Books, New York, 1996
*3 - Paul Hawken, Blessed Unrest, Penguin Books, 2007